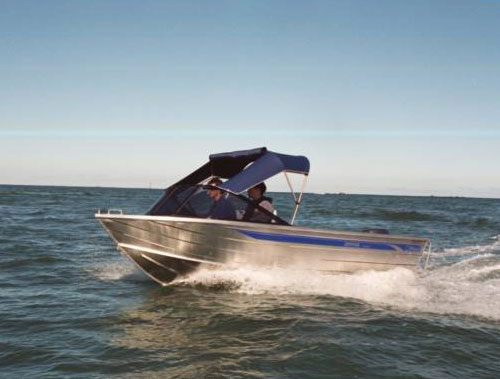 I sometimes wonder why small aluminium boats are not painted and large ones are. Actually, I know the reason – cost. Painting a dinghy adds too much to the price for it to be competitive. On the other hand, doesn’t paint detract from one of aluminium’s selling points – ruggedness and the ability to take a scratch? Compare six or seven year old raw and painted boats and guess which one looks younger. All of which leads to today’s boat: the unpainted Stessco 420 Skipper.

At 4.2m, or just under 14 feet in the old money, such a boat used to be considered medium to biggish. Now, it looks pretty small but is as capable as it ever was for inshore fishing. It is super convenient for towing and launching, and will cost next to nothing to run.

Those virtues are a function of its small size andweight. Together they constitute a boating fact of life – the smallerthe boat, the more use it tends to get.

Boat City provided the test boat and Boat City’s boss Graham Gow – with a floor full of boats to choose from – takes this or a near clone to his Wedge Island weekender. The light weight and unpainted bottom are exactly what you want for beach launches and, especially, recoveries. Incidentally, it is a 3mm bottom – thicker than just about any other pressed 4.2m.

The runabout layout is inevitable for this size boat – other than completely open, it gives the best use of space. Small runabouts, though, can behave oddly because of the amount of weight forward. In turns, especially if they are badly trimmed, some lay right over on the steep bottom forward. A nasty sensation. Another unwanted sensation can be a nightmare ride.

These were problems our Stessco did not have. This was partly due to a well-balanced hull shape and partly because the tilt pin was set in the right hole. On non-power trim motors, the pin is typically put in the second hole out and never changed. It is well worth a bit of experimenting to get a boat tat is basically happy, and whose trim can be fine tuned by moving your navigators weight around a little.

With two people in the forward seats, our stationary trim was level and, at planning speed, this developed into a compromise head-followed sea stance that worked well and delivered a more-than-acceptable ride.

The two seats windscreen are swivels on genuine posts rather than being stuck on top of a box thwart. This is a box thwart aft, which is where you want one and, between two positions, is a carpeted deck giving flat stowage space for eskies, anchor box and the like while also allowing painless movement within the boat. Between the thwart and the transom is a rack for battery and fuel tanks.

The windscreen has an opening section giving easy access to the stem for anchoring. No anchor well of course, hence the remark about the anchor boxes – which is a much better solution than a heap of anchor, chain and rope under the foredeck.

Our motor was a 30hp Yamaha two-stoke. Boat City offer a selection of 30 and 40hp motors, although an extra $4000 for a four stroke 40 is such a big add-on to a basic boat’s price that I doubt it will get many takers. The 30hp worked well with two up and, considering these boats are unlikely to travel great distances, will suit most people.