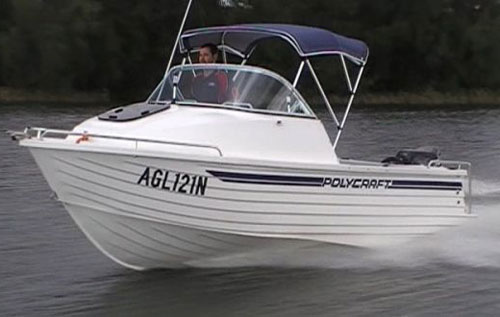 While the Polycraft 530 Warrior is a capable craft in it’s own right, probably the most significant thing about it is its stuctural material: roto-moulded slastic. Stated boldly, perhaps not too impressive, but this is a very special plastic with important engineering and other properties.

UV-inhibited polyethylene is the stuff that sheathes the skids on trailers and the gunwales of protection-minded fishing boats: slippery and hard-wearing. Make an entire boat out of it and you get a boat that is not frightenedof jetties. It does not scare other boats either. Polycraft, mostly the centre-console versions, have become popular tenders for large cruisers.

Serious hits might put a dent in the Polycraft but it then springs out again. On test, polyethylene shows five times the impact resistance of fibreglass. Scratches are not a serious problem because the colour goes right through the material. And if some tremendous accident puncches a hole or removes bits of meterial, low temperature plastic welding will fix it. This is the material of choice for fish farm workboats, perhaps the hardest-working commercial craft.

The review 530 has what was originally meant by cuddy cabin: a sheltered space available for any task but mostly to keep gear and, occasionally, people dry. It has a clear hatch to give access to the foredeck, no rear bulkhead, no seats or bunks but, like the rest of the boat, is carpeted. The cockpit has seats: two at the windscreen and a folder for four at the transom. The rated people capacity is seven, and the last aboard would have the choice of the carpet or standing holding the rail that surrounds the windscreen.

There are cave lockers under the forward seats but not a lot of storage space in the cuddy to confine items – some nets with bungy cord openings could usefully be fitted there. Where side pockets would usually be found, the Polycraft has a flush lining formed by a complete inner-hull skin. This carries buoyancy right up the sides, giving the boat level floatation in the event of swamping.

The layout and fittings have been well thought out as they are usually in boats that are entirely moulded. The bow rails, for instance, are purely decorative on many boats, but not here.

Instead of being guard rails for people who will never set foot on the foredeck, they are mounted low to be useful in handling the boat when there is no finger jetty at the boat ramp.

The 530 has the prime requirement of a fishing boat – space. With the rear lounge folded and the swivel seats swung round, four people can fish in comfort. If they move around they will notice the other key attribute: this is a particularly stable boat. There are rod-holders and a pair of bait tanks in the transom but in general the 530 is not single-minded on fishing. And this is how many people prefer it, favouring an esky over a catch tank, for instance.

The review boat was powered by a 115hp Yamaha four-stroke, although motors down to 70hp should be acceptable for most tasks. The 115hp gave a sparkling performance and, with its non-feedback steering, an effortless one.

The combination of four-stroke power and polyethylene double-skinned hull made it an exceptionally quiet experience.

It was a mild day but we stessed the boat with full power and whatever disturbed water we found. The ride is good. Almost certainly the slight flexibility in the bottom absorbed some of the impacts, assisting this.

The life of boats built from synthetics and aluminium is vastly longer than the previous generation using sheet or moulded ply and plank, but polyethylene could stretch this further.

Utterly impervious to water absorption or corrosion, hard to damaga and cheap to fix, it looks very attractive.