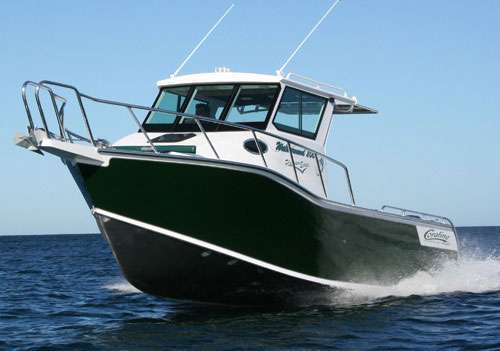 The 800 is by far the biggest boat Coraline build – half a metre longer than its previous biggest and with a beam 35mm wider at 2.85m. Rather than hanging on to the trouble-free towing beam of 2.5m, the builder went for what worked best on the water. It certainly paid off in stability. There is so little heel with a heavyweight sitting on the rail that the boat might as well be on the trailer. And those extra millimetres pay dividends in usable space.

The walkaround layout has side decks you can indeed walk around, a wide cabin and plenty of room between the seats to get into it. Yet there is no real weight penalty. Towing weight is a little over 3 tonnes, so practically any of the bigger four-wheel-drives will easily cope.

The 800 has big power to match its size – a pair of 150 Yamaha four-strokes. These proved good for a whisker over 40 knots flat-out, with effortless cruising at 22-25 knots.

The dealer also offers the boat with a single 350 Yamaha, which would undoubtedly give quite a few more knots – although few customers for this class of boat would be interested in that. They could be interested in the cost saving of more than $2000 and in the reduced service costs each year. But choice will more likely come down to the feeling of self-reliance that twins give, particularly on expeditions in remote areas and further offshore.

This is certainly the kind of boat for going to those places. The hull has a reassuring presence on the water and it is a relaxing boat drive – just what you need on longer trips. The twin 350-litre tanks mean they can be very long trips and the standard domestic fit-out will give four people a good level of living. Customers for the 800 will primarily be fishermen and unlikely to buy the boat as a cruiser. But bigger walkarounds can make excellent weekenders and the 800 is a fine example.

The fore cabin, which has standing headroom in its rear half, is a roomy affair with big vee-berths and a flushing toilet. The cabin entry is via a telescoping ladder that slides away for access to the mid-cabin. This houses a double bed and has respectable overhead clearance, with artificial and natural light adding to its habitability.

All surfaces downstairs are lined and the accommodation is quite usable – not luxurious but very practical.

The driving and housekeeping region is under a closed hardtop with sliding side windows. The driver has a sliding seat on a box locker and the offsider’s seat opposite faces inboard.

Aft of the offsider a neat galley unit faces the cockpit. This is the spot for cooking, out of the wind and sun but still essentially in the open air. The sink, fridge, single-burner stove and locker are competent enough to keep the food moving for several days.

The entire boat is carpeted, including the dash in typical Coraline style. Also in the usual style are the full-width dash grab-fiddle rail and the massive construction of the supports for windscreen and hardtop. The 800 has many admirable touches, including easy access to the console’s neat wiring, oversized guard rails and massive amounts of storage space.

Buy one of these and you could find yourself with a lot of friends.