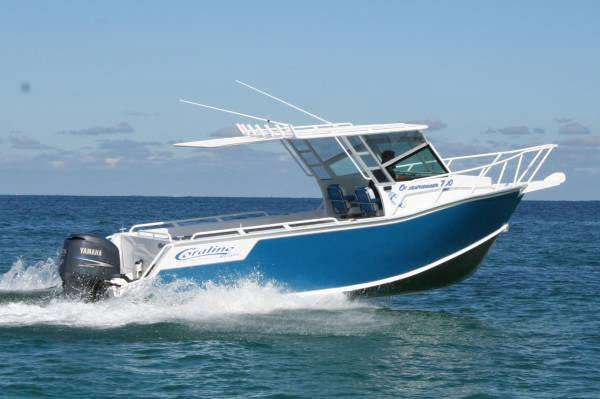 The Oceanrunner series of plate aluminium boats is Coraline’s most popular model, well geared for fishing, with a cabin that can be set up for sleeping, and with plenty of protection from the elements.

The review Coraline 700 Oceanrunner is a big trailer boat – 7.6m in overall length with a maximum no-fuss beam of 2.5m. A lot of the length is devoted to the cockpit, which has comfortable seating for six. These are permanent seats with lockers underneath, contributing to the storage space that is a feature of the 700.

An even more significant feature is the hardtop. Immune to sun rot, it has the strength to carry loads such as a tender, or a cluster of surfboards or kayaks; a rail around three sides provides tie-down points as well as handholds. A cantilevered fabric extension carries the shade over most of the cockpit without impeding the fishing action.

It is an open-style hardtop with clears provided to fill the gap above the windscreen. The windscreen itself is the classic Coraline structure: a massive frame, with armour glass surface-mounted on it – no leaks, fewer corrosion opportunities. Little short of gunfire could damage or stress it.

Our hull was painted blue and white, and this theme was carried on in the blue-and-white upholstery and blue carpet. Unsurprisingly the carpet covered the deck, but it was also in less obvious places. Side pockets, dash top and oddment trays in seat top boxes were lined with it, taking away rattles and, in the case of the dash top, providing anti-skid properties.

The cabin is geared for shelter, not sleeping, and is unlined. It has lighting, good sitting headroom and space for a Porta-Potti. Possibly for the benefit of users, a fabric, roll-up door is fitted.

There is no fore hatch (and so no leaks, and no hardware to maintain), but foredeck access is still good. The side decks are wide enough to allow legs and feet to fit between rail and cabin side, and pleanty of handholds have been laid on. For added security, the side and foredecks are coated with anti-skid paint.

The 700 has a suggested power range of 150 to 250hp. The lower level might be a bit disappointing because the 225 four-stroke Yamaha fitted to the review boat, though it had plenty of zest, was far from overpowering us. It took us up to a maximum of 38 knots and burbled happily at 25 knots, giving every indication that it would be happy to do so day in, day out.

The steering gear, of course, is hydraulic; mechanical steering on this size of motor would be unthinkable nowadays, not to mention very hard work. Both main seats swivel and slide, allowing a good relationship with wheel and footrests. On many boats the footrests are an afterthought and even non-existent, but and hour or two in the driving seat will convince anyone of their importance.

The driver faces three Yamaha digital panels, and the navigator handles the 27mHz radio. Either console has room for the Furuno sounder and GPS-plotter. The combined dash top has a full-width fiddle-grab rail capable of restraining any odds and ends.

Fishing will be this boat’s main business, and as standard it is fitted with the main requirements. Space it has in abundance, and at rest it makes a deep and solid footprint in the water. A big catch tank-ballast tank is reached by lifting a panel of carpet and there are sockets for 11 rods.

Coraline has been in the business long enough to know where to put rails and paint. A rail surrounds the whole of the cockpit, sited at the side deck’s outer edge and leaving space for casual seating.

The other rails forward sit entirely within the boat’s perimeter, meaning they are not accidental rubbing strips. The half-round gunwale section that is intended for that job has been left unpainted.

Other notable pieces of hardware are the heavy-duty cruciform bitts for berthing lines, and a top-class boarding ladder. Whoever designed it has climbed a few ladders: when deployed it rakes well aft, it projects well down into the water, and the three treads are very deep – much easier on the feet than the usual skinny bit of pipe.

At recovery time hand-winched the 700 on to the trailer instead of driving it on, mainly to see how well it matched its multi-roller trailer. We found a good match indeed, and made a quick, low-exhaustion job of it – exactly what you want at the end of a day. It winches down to a trickle.