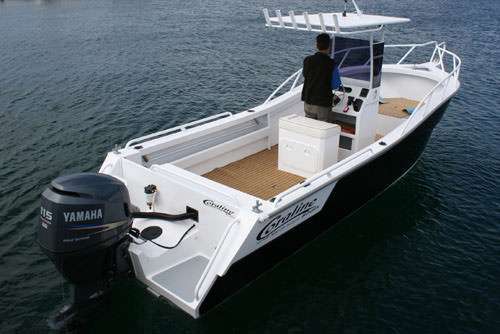 The “long” in the name of Coraline’s Long Runner 700 does not mean a stretched 7m vessel – a 7m hull length is what you get, but an unusually narrow beam gives it a long-boat’s proportions.

It is reminiscent of the fibreglass UB boats, variously nicknamed banana boats or longboats that went out of production several years ago.

Coraline was in fact aiming at some of the UB’s virtues when it launched this new series, in particular its low power requirements. In general, for a given bulk of boat, making it longer and narrower means more speed for the same power.

The beam is 2.15m, 0.35m narrower than typical for this length. It gives the 700 the kind of volume – and advantage over a 6m of a gentler motion into a head sea. The narrowing also allows another feature to assist ride quality – a sharper deadrise.

Indicating its frugal power needs the review boat came with just a 115hp from a two-stroke Yamaha. That power unit holds down the price, despite a classy finish and some desirable features and extras.

The layout is centre-console style, suitable for fishing or as a big boat tender. The builder had the latter in mind when replacing the usual half-round aluminium gunwale rubbing strip with a rubber one – a shift in protection away from the boat itself and towards whatever the boat touches.

The sheer line rises forward but the deck rises even more in a step up to a casting platform protected by typically robust Coraline siderails. A socket in the platform accepts a swivel pedestal seat.

The rest of the deck is not broken by much; the console and its almost-double seat are about it, which is how most centre-console buyers like it.

They get a hardtop, which has an array of rocket launchers on the back section, plentiful grab rails below and it carries the aerials and lights.

This boat is among the few that puts its masthead light legally high enough – high enough to be visible from ahead. The windscreen is also good, wide and high enough to keep nature at bay. The hardtop folds, making the 700 a lower towing proposition and stowable under low roofs.

The console is big enough to provide storage for bulky gear and also has oddment space lined with rattle-reducing carpet. More storage space is on offer under the bow platform with smaller quantities in transom lockers and side pockets.

The seat box locker has a door, which is more convenient than the usual lifting top.

The console’s width was nicely judged, enough to give protection and dash space but leaving usefully wide side decks that can be walked rather than sidled along. Moving around generally revealed a boat with better steadiness than might have been expected from the modest beam.

Under way the 700 gave all the signs of fulfilling the builder’s intentions. The sea was not lumpy enough to test the ride’s softness to any extent but the reduced motion was obvious, and so was the slipperiness. We reached a maximum of 35 knots in brisk time and, even more creditably, were able to plane at under eight knots. The hull is foam filled, so it was all achieved at low noise levels.

The 700 is a satisfying boat for a little hooning. The hydraulic steering made it a low-effort exercise, and the boat relished tight manoeuvres and went through them all with commendable dryness – always a welcome habit for passengers on a centre console.