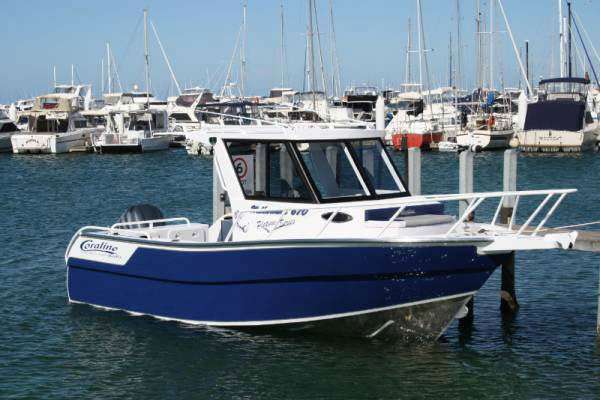 Coraline’s 670 Ocean Runner and Walkaround’s aluminium hull features an item from the builder’s seemingly endless list of options and continual improvements: a deep knuckle. The presence of this has allowed the deadrise to be increased by two degrees to 20, with the same amount of stability. Plate aluminium boats have typically had deadrises of around 12 degrees, but several builders have worked on ways of steepening the angle without decreasing stability. In the Coraline 670’s case I thought I could detect that extra 2 degree’s contribution to a ride that was always pretty good.

A 6.7m hull length and a maximum towing permit-free beam of 2.5m provide the versatile walkaround with plenty of access along the side decks and to the usable cabin. The side decks have just a single step, and are wide enough for unfettered walking or for easy playing of a fish.

The bow rails, at a useful height, sweep back to the rear edge of the cabin and are backed up by rails.

The hardtop is a beefy structure well able to carry a load, and those rails would act the part of a roof rack. There is plenty of other rails around the boat for standing or sitting passengers, or for the passenger movement you expect on this style of boat.

Although a major aim is always to provide wide-open spaces, this walkaround still manages to provide seats for seven or, at a pinch, eight. The lockers are on two levels: the upper offers access via hinging the seats; the lower uses the more common doors. The seats even have dual-height footrests, vital for any but the shortest trips.

They flank a zip-up door in the bulkhead. This is my choice of closure: light, no slamming, and cheaper. It is not the secure lock-up people want when on the road, but all most people want is the occasional privacy for the cabin. This cabin will be used mostly for storage and occasional shelter, much more rarely for sleeping in.

The space beneath the hardtop, on the other hand, will be in constant use, and there is a lining here with the radio console and stereo powerhouse embedded within it.

The space is welcoming, with sliding side glass, two comfortable seats with enough room between them for clear access to the cabin good vision and convenient driving controls and a carpeted and fiddled dash.

Side pockets extending aft are also carpeted. An advantage of aluminium is that they are strong enough to act as steps.

A fabric extension of the hardtop stretches to shelter standing passengers and will come in handy for anglers looking for respite from the sun.

They are also well equipped for the basic fishing task. A battery of rocket launchers augments four rod-sockets in the coamings, and there is an under-deck catch tank. This tank can also be used as a ballast tank to increase stability when drift fishing.

A 200hp Yamaha four-stroke thoroughly powered the review boat but choice of motor can lower the boat’s price noticeably, and if less power does the job for you then why not take it.

The 200hp gave a top speed of around 40 knots that the 670 easily held in the slight sea conditions. The indirect evidence was that this would be a fine offshore fisher, combining the softer ride with good following sea ability for the run home.