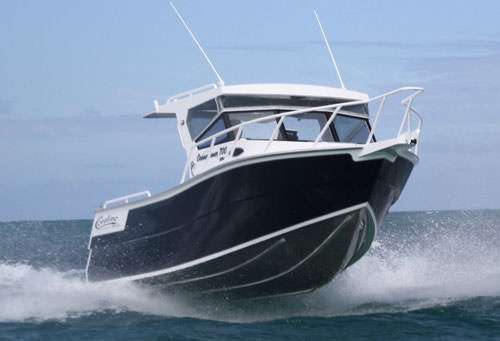 A Coraline, of whatever size, is almost the definitive WA boat. Plate aluminium (WA uses that probably better than anywhere else in the world), stable at rest, straight tracking downwind and optimised for fishing.

The review Coraline, the 670 FX, is the biggest in its range with a 6.7m hull length, and with the maximum trouble-free towing beam of 2.5m.

It is built to take a bunch of fishermen serious distances, and get them home. A 300-litre tank coupled with a four-stroke motor makes the distance about as serious as it gets

This size and style of boats attracts buyers up north who, firstly, have the money to buy them, and secondly have the vast and widespread grounds to really use them.

For those who live down south and only go north for winder holidays, the 670 is light enough to comfortably by towed by an ordinary four-wheel-drive.

The 670’s hardtop extends half way back over the cockpit, and a fabric extension shades the rest. From the Targa aft it is all cantilevered, giving unobstructed fishing access to the length of the rail.

The style is open hardtop, meaning an air gap between the windscreen and top. You can fill the gap with standard clears is the weather is bad enough.

Most than any other boat I can bring to mind, the Coraline provides massive support to the hardtop. This heavy-duty pipework extends down as the windscreen frame, carrying surface-mounted or stick-on armoured glass. The handrail running around the hardtop could easily double as a roof rack to carry surfboards or even a dinghy. The stability is up to handling a fair bit of weight on top.

The gunwales hit mid-high, making comforting high for standing against. It also is the right height for perching a casual tail on, the grab rails are mounted on the outside edge to let you do just that.

Most formal seating is provided by a two to three-seater lounge aft, and a pair of grade-one armchairs up front. They sit on bigger than usual locker boxes, and have the smart addition of grab rails on their back for standing passengers.

The locker boxes extend out to the sides, and have oddment recesses on top. These are lined with carpet to remove maddening rattles from oddments. Another place – besides the deck- to get good value from carpet is the dash top. Which also has a combined fiddle-grab rail round it.

These are examples of the detailed thought that has gone into this boat.

The cabin is more shelter than accommodation, although one adult or a pair of children could sleep in it. More importantly, it offers dry stowage for gear and a place to locate a toilet. In a weight and rattle-saving move the door is fabric although, since most Coraline’s are more of less customised, a lock-up could be specified.

Absent on many other earlier Coraline’s, the 670 has an opening clear forehatch. Always welcome, it is less vital here than on boats with poorer side deck access forward. It is easy to move forward on side decks that are wide enough, and are well defended by side rails and hand rails.

The side rails are mounted within the deck perimeter so they do not become defacto fenders. That job is done by half-round extrusion mounted on the gunwale – and mercifully left unpainted.

And, on the subject of rails, why is the bow ladder so rare nowadays? How much drier to climb aboard over a bow noses up to the beach, and so much safer for being as far from the propeller as possible. But as far as stern access goes, the Coraline’s ladder is right up there, raking aft and with big treads.

The fishing, hardware is good too including a kill-ballast tank fitted with a venturi for rapid emptying, a furuno colour plotter-sounder profuse rod holders, plumbed bait tank and manual deck wash pick-up.

Out 200hp Yamaha four-stroke, while not exactly overkill, took no prisoners. It was exhilarating to play with but very good performance would still be on tap with 50hp less.