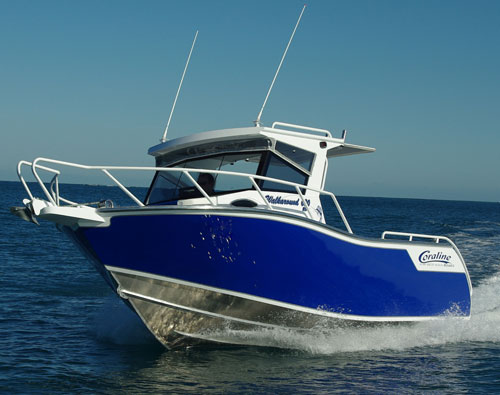 Coraline’s Walk around model is a functional new model for fishing or family boating.

Some boat builders call then centre cabins, Coraline opts for walk arounds – a pleasant style that combines the fishing access of a centre console with better weather protection and room for the toilet that women sensibly insist on.

The Coraline 620 tells no lies, with a hull length of 6.2m and it has the maximum rule-free beam of 2.5m. The dimensions provide the size that a walk around needs to function effectively.

The cabin width was a judgement call between side deck widths and enough space for a pair of seats with cabin access between them. It all works pretty well – just a bit tight between the seats and with side decks wide enough for normal walking.

They give access to a useful-siazed fore cockpit that has a double seat formed in the cabin top. It shares space with a power windlass which might seem a luxury, but not to anyone who owns one.

Walking forward has the safety of full-height side and bow rails as well as grabs along the hardtop. Grab rails surround the main cockpit too and also feature in and around the driving position – this boat was obviously designed by someone who uses boats a lot.

Coraline windscreens are all flush-mounted, high-speed ferry fashion, but the 620 takes style and function a step further. The three-piece screen has no mullions – the armour-glass segments are bedded up against each other in silicon, eradicating blind spots.

Above the screen is an air gap to the hardtop, filled or not according to taste with clears. With them in place the driving area effectively becomes a backless wheelhouse.

The hardtop is lined and has lights and a radio console and, on the review boat, a stereo. The other electronics have plenty of room on the vertical and horizontal surfaces of the dash.

In Coraline style the dash gets it’s own piece of carpet to give oddments some grip and to remove rattles and scratches.

Footrests are neatly recessed into the bulkhead, meaning nothing gets in the way when standing. Sitting or standing vision is good and the placement of the throttle is dead right.

The two seats at the dash are mounted on boxes. The box under the driver has a locker door, the other contains a fridge. A rear lounge for three or four makes up the rest of the seating and slides out to clear the cockpit for fishing.

The deck is carpeted (every aluminium deck needs some covering) with a flap located by press-studs over the catch tank.

The cabin is a children-only proposition for sleeping, but has good sitting headroom for anyone taking shelter. It also houses a real flushing toilet, whose presence required the door. This is a solid, lockable job; very handy for long road trips. Stops at roadhouses are favourite occasions for having a boats contents looted.

The recommended power range is from 115 to 150hp. The test boat’s 150hp Yamaha four-stroke made for a very lively pace – 37 knots flat out, reached in jig time.

One bonus that comes with abundant power is lowered noise levels. Ease back to cruising speed and the resulting small throttle opening means a quieter boat. Coralines have always had the continuous improvement theme, but in recent years most models have had radical redesigns to their bottoms. The 620 is one of them and it shows in the ride quality, which is above average, but not at the expense of stability at rest.

An unsteady console or walk around has lost half the point of it’s existance, but the 620 could handle a gangle of anglers at its rails.