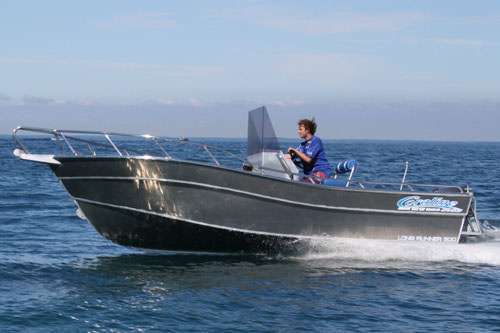 Paintwork on an aluminium boat probably encourages you to be more careful when parking it alongside jetties, and perhaps it gives you a finer feeling of ownership.

But a graunch in the two-pack coating would give you an infinitely worse sensation than the same blow to an unpainted boat and would take away a lot more value.

My own view is that if I am going to be hauling pots on to it, dragging lines over it and filling it with careless mates, then there is much to be said for going naked. Which instantly attracted me to the Coraline Long Runner 600, or rather, to the unpainted and generally Spartan example on review.

The Long Runner series is the latest in Coraline’s seemingly numberless range. It features hulls with more deadrise and less beam, adding an interesting variety to the choice. The bigger the boat, generally the more seaworthy, but adding length rather than beam probably has the greater effect.

You miss out on some stability, but you get a more easily propelled boat. You pay your money and you take the choice.

Our 600 (6m hull length) was only lightly narrowed, with a beam of 2.15m, and this gave proportions that were easy on the eye. As well as being paintless, it was light on bells and whistles in a deliberate move to hold the price down – $42,570 on a multi-roller, braked trailer is under the odds for a 6m boat, even one propelled by a two-stroke motor.

Two-strokes may be unfashionable and 90hp might sound on the low side, but it did an excellent job – 34 knots from that hull and motor combination is very good going.

There are rails down the entire length; high forward in the form of guardrails, lower aft as grab rails, and carefully formed and placed.

The grab rails are at the outer edge of the coamings, so an angler can take casual roost there, and the bow rails are canted slightly inboard to remove any chance of them being the first contact with a jetty.

The console is a simple structure with an even simpler windscreen: a one-piece wrap-around. The console contains a storage shelf and has side grab rails to make up for the lack of handholds a canopy support would have provided although a canopy is an option.

The seat is a tight double with a reversible back, and has a locker beneath it; more storage is on offer under the bow platform and in side platforms. The transom lockers of most Coralines are absent, the structure being the conventional transom with splash well.

All the important things are on board: carpet (walk on aluminium in bare feet and you will vote it vital), a bowsprit, cruciform bollard and cable well (simple anchoring is a must locally), catch tank, self-draining deck, rod sockets and hydraulic steering.

Cost has been kept down but not at the expense of construction. The hull has the usual full-depth frames, 5mm bottom, 4mm sides and a five-year warranty.

The whole thing comes together well once afloat. With two of us on board the boat was pretty much impervious to any of our movements, meaning sure-footed fishing. We caned the boat hard in the modest sea, multiplying its effect to simulate something close to average cruising conditions.

As an earlier inspection of the hull had suggested, it coped very well. The forefoot is sharper than average, as is the deadrise, and these combined with the narrower beam to give a soft ride with low accelerations. For fuss-free, low-maintenance boating, the Long Runner 600 would be hard to beat.