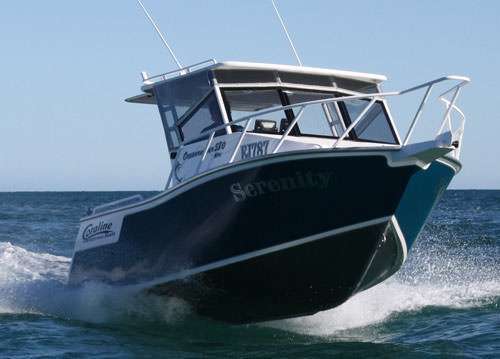 CORALINE IS VALUE FOR MONEY

Coraline, in their Oceanrunner series, have made their own statement in the fisherman’s cuddy cabin style.

Plenty of cockpit at the expense of the cabin, all the most-wanted fishing features as standard, a more comfort-oriented interior than most and first class hardware and fittings.

The Coraline 580FX, is typical of the breed. The cuddy is too short to be considered a sleeper, and few people would miss that. But besides offering a sheltered sitting and storage space inside, the raised metalwork and extended sides of the cuddy make a dry driving position with as little or as much airflow as you want.

In keeping with its non-residential status, the cuddy has no windows or skylight. No fore hatch either, although this is missed a bit more. The option of standing in a hatchway to anchor is often preferable to climbing round to the foredeck. Still, Coraline will customize any of their models and are happy to fit anything you want.

The 580 is strong on security – appropriate in a boat where standing is at least as common as sitting. It starts out with the sort of steadiness a 2.45m beam on a 5.8m length gives. It continues with an abundance if rails. Heavy-duty bow rails, grab rails down the rear edge of the Targa – the natural standing stop for travel – and more rails around the whole of the cockpit.

Those last ones are welded at the outer edge of the side decks – a thoughtful bit of positioning.

Probably the more common location is nearer the inside edge – which loses you a casual resting spot for your backside.

Most boats built with an eye on fishing have either no rear seats or a folding removable lounge. Space is the reason for justification, although there is no rule that says you may not sit to fish.

The Coraline has a permanent rear lounge with thick upholstery mounted on lockers. It seats three at a pinch, and still leaves room each side to stand at the transom. The upholstery illustrates Coraline’s attention to detail. Seat panels-and the carpet too-match the colour of the hull’s topsides, which is dark blue except for the unpainted rubbing strake. I cannot imagine why some builders paint the bit that is supposed to be protecting the rest.

You get the best ride in the boat on the rear sear, but the person who pays for it all stays better protected. Up at the windscreen you get cover ahead, above and on each side. The wrap around screen is mounted in (or on really, since its glued there) a massively strong frame – the sort that gives you confidence when you hang on to it.

The Targa mounts a duckbill bimini, with a removable rearward extension, and infill clears come as standard. It would need to be a nasty day to mount them as spray seems to stay well clear of the windscreen.

The armchairs are mounted on extra-wide lockers that have oddment shelves on them. A neat Coraline touch is to line with carpet everywhere things are likely to get casually placed. No noise and no paint damage.

The seats cushion the bumps well, although the hull already delivers a more than acceptable ride. The ride actually seems better than it is due to the lack of cues booming and groaning from the hull. The impression is of a well-reinforced bottom.

Coraline recommend power between 90 and 115hp. Agent Boat City installed a 115hp Johnson two-stroke, saving $4400 over a four-stroke and close on 10 percent of the package price, which is a sobering thought. It did a fine job.

On a day with a fresh sea breeze, comfort and an ageing back dictated less than full throttle. What we did get was excellent response to throttle and trim, allowing us to se the boat up dynamically for the conditions.

The fuel tank has a generous 175 litre capacity – about 90 percent of a 44 gallon drum, which is also sobering.

Sharing underfloor space is a kill tank. Other standard fishing inclusions are rod holders, a colour sounder and a GPS plotter. All the statutory safety gear is there too.