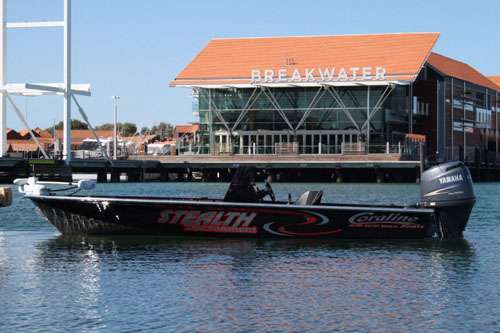 Coraline has logic for most of the name of its new bream boat. The 550 is logical because it is 5.5m long; similarly the Tournament – this is a competition boat – but the Stealth inserted between them?

Fair enough, it’s black and low slung – but the outrageous artwork and 100hp pushing it? This is not a subtle boat.

If you want to get really unsubtle you can specify 150 hp. But you could always drop plenty of knots by engaging the optional electric thruster. Ah, that must be the stealth.

The thruster is just one component of a single-minded fit-out: bream beware when this boat turns up. Or any other fish within a few miles of the coast come to that – this is not just a brackish water boat. The low freeboard is a limiter but the hull is capable of coping with quite nasty chop.

The hull’s most outstanding feature is its stability, which is phenomenal. You can literally stand on the gunwale, with no one else in the boat to ballast it, and still not get a worrying lean.

One welcome feature, thanks perhaps to the big knuckles at the bow that continue aft as reversed chines, is dryness: water is thrown out horizontally rather than upwards.

The layout is side console, making the most of the 2.1m beam – there is plenty of fishing space alongside it to port. The boat comes with just one pedestal seat as standard. But sockets abreast of it to port and another in the bow platform give a choice of positions.

The console is a small structure so the clear deck area is large for the boat’s dimensions, but below this open space is an abundance of fishing desirables. The bow platform has a big volume below it, mostly taken up by an enormous wet or dry locker that could take slurry for a non-competition day.

The vertical surface at the break of the platform houses tackle drawers. The battery, anchor and cable are housed in lockers ahead of the wet locker. Mid-deck further aft has the main 80-litre catch tank beneath it. It has a removable plate dividing it in two and is equipped with an electric circulating pump.

Although there is a limited number of official seats, casual seating abounds. The break of the platform offers room for at least three on the carpet, and a similar number has generous space across the top of the lockers right aft.

Filters and battery live within these lockers but there is room left over for all the gear three or four people could brig aboard.

There is also a tricky gadget sharing the space – a volt-sensitive relay. This organises the battery charging; it ensures the starting battery gets first use of the alternator’s output but once it is nicely topped up diverts the charge to the thruster’s battery.

Coraline handled the Stealth’s detail well. The gunwale is polished rather than left bare; cleats are pop up; the paintwork is beautifully done as well as being eye-catching. Which it certainly is: the boat was a magnet for spectators at Hillarys.

With the 100hp Yamaha four-stroke on the back speed was in the high 30s. Despite its 4mm plate throughout this is a light boat and easily driven, but it is not skittish point it and it holds its line. Response to trim is good and the hydraulic steering delightfully light.

Coraline builds an astonishing number of models and this is probably the most specialised yet. But of course it does not have to be just a bream boat.

There is nothing to stop you hauling crab nets over the side, and it could be the other man’s perfect barra boat.

It would look cool parked outside anybody’s house.