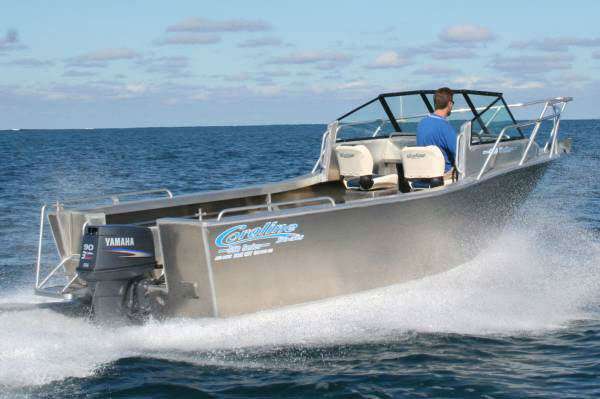 I have always been a fan of simplicity in boating, partlybecause it means cheaper buying, partly reduced maintenance and worriesabout minor damage.

The review boat, the Coraline 550 runabout, raises simplicity to an art form. Most aluminium boats have naked bottoms; the only paint on the 550 is its name, and that is probably stick-on lettering.

One of the reasons for buying aluminium is its general ruggedness, so why would you then coat it with several thousand dollars worth of venerable two-pack paint? The 550 offers more to the would-be relaxed owner. There is a lack of locker-door and other hinges to oil, an absence of plastic fittings to go brittle in the sun, the trailer brakes are purely mechanical, and if you want tricky items such as pop-up cleats, don’t look here.

Yet many items that may be verging on optional extras are thrown in here as standard; things like carpet and bow rails. There are excellent reasons for these two. I always consider shoes as optional extras on a boat but bare, sun-baked aluminium does terrible things to feet. And since there is no fore hatch or opening windscreen, rails are needed for a safe passage forward.

The runabout layout and the generally stark approach to fitting-out give the 550 a spacious cockpit for an 18-footer.

The only things intruding on the space are a pair of swivel seats forward, and a plain aluminium quarter seat alongside the full-depth motor well. The swivels sit on boxes which, naturally, house cave-style storage.

A mountain of bulky gear will fit under the foredeck,and side pockets are provided for the fiddly stuff.

As for catch tanks, take an esky instead. Bait tank?Take another one; compartments and doors take fabrication time and cost money. Coraline has kept the price under $39,000, so a few deletions have paid their way.

The 550’s sheer line increases the bow’s freeboard, and the windscreen is mounted on a raised structure to further lift the glass above the water. On the review day’s mild sea, not a drop of spray hit the windscreen.

The seat are probably average too, but nicely matched with the boat: even over the harder lumps they did not bottom out.

The cockpit is self-draining, so the deck is set above water level and hence the coaming does not hit the thigh very far above the knees; this makes the grabs welcome but the 550’s form stability makes this a steady boat for it’s size. A 2.4m-beam is generous on a 5.5m hull length.

The motor fitted was a 90hp Yamaha two-stroke, although a range of two and four-strokes up to 130hp is on offer.

In areas where it really counts the 550 is top-class. The hull is in 4mm plate, and structure above the deck is thoroughly engineered.

The anchor gets a bowsprit and a rope locker while swimmers get a platform and ladder.