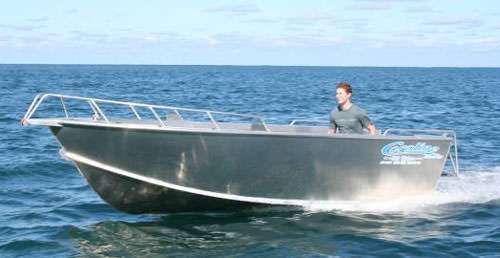 BIG ON TOUGHNESS AND SPACE

Whenever Coraline catches a glimpse of an unfulfilled market niche, it seems it immediately fills it.

The latest of its products I tried has to be the only self-draining plate aluminium dinghy on the market – the 480 Wahoo.

It is about as big as a dinghy gets before a builder thinks of a different name for it, and it has a construction as complex and heavy duty as many much bigger boats.

It reminds me more than a little of a pearl farm dump dinghy. The Wahoo is smaller but still makes a big footprint in the water: a hull length of 4.8m and a beam of 2m.

It is certainly every bit as tough, with a 4mm bottom and a lot of metalwork bracing everything.

The anchor well is an example of the rigid structure. Where small aluminium craft usually have something like a washbowl let into the foredeck, often in plastic, this one has a compartment made by welding in a collision bulkhead.

As well as a small foredeck, the Wahoo has full-length narrow side decks and structural side pockets.

Our motor was a basic Yamaha two-stroke, with manual tilt, starting and pre-mix lubrication. But it has the all-important electronic ignition, and starting was an easy two pulls.

In the same simplified spirit, we had a portable fuel tank. Pre-mix fuel does not age well, so there is a lot to be said for small, easily cleaned tanks. However, the Wahoo has the option of an 80-litre built-in tank.

There was a time when 40hp was a respectable motor on a runabout, and an unheard-of quantity of power for tiller steering. Yet it is at the bottom of the suggested power range for the Wahoo, with 60 at the top.

The length of the tiller is what makes it controllable nowadays. The old stumpy steering sticks made for violent manoeuvring. Two-up, 40hp provided all the performance we would ever be likely to use on the ocean; those with a taste for speed could use the extra 20hp on Peel or the southern inlets.

I am an advocate of not going out solo in dinghies (in fact, any boat), but the Wahoo has the mass and shape to cope far better than most with all the live weight right aft.

Bigger dinghies are often fitted with add-on boarding platforms, but they usually need athletic ability to actually use them. The Wahoo’s has a two-rung ladder and a grab rail that is a continuation of the side rail.

Except for a small midships section, the rails are continuous. This makes them handy to where people sit and useful during beach launching and recovery.

If ocean beach launches are your boat’s future, aluminium is the only way to go. Safe recovery relies on returning the boat to the trailer on dry land; so towing the boat astern of the trailer for some distance over sand is inevitable.

The seating is in the ends, leaving an open area for gear and for clear space between anglers. Forward is a carpeted raised platform, with bulk storage below, and aft a similar platform-seat spans the full beam.

Below this is space for a couple of portable fuel containers. The self-draining deck means a limited coaming height, but this is not a boat where you would spend a lot of time on your feet. The two of us could move to different positions, or even the same position, without causing any significant twitch in the boat.

Probably for most buyers, though, the Wahoo already has everything they need – a rugged, no-nonsense boat at an attractive price.