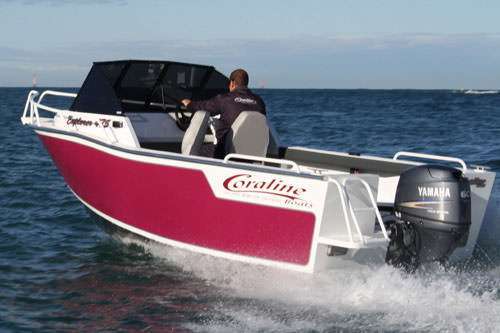 ONE FOR THE MATES

Coraline has expanded its range to include a 4.75m runabout. With a range apparently as big as Quintrex’s, the relatively tiny builder is meeting a small resurgence in the popularity of runabouts and, especially around this size, there is much to be said for the layout.

Probably the biggest thing is that, next to a completely open boat, a runabout gives the most room for a given length. If you don’t have a lot of length, and 4.75m is not big in most people’s reckoning, you are usually looking for ways to stretch the space.

However, the 475 Coraline is bigger than its name might suggest. Where some builders use the overall length in the model name, Coraline us the buoyant hull length.

In boats of this size you spend the maximum amount of time sitting, and that is a good safe principle: the coaming on the 475 is not a lot above knee height. This is partly a consequence of outright size3 and partly of the self-draining deck that necessarily has to be above water level. On the other hand the coamings are padded and the kids will love sitting on the carpeted deck and leaning back against them.

When they are allowed to, of course. Most of the time this is going to be a bloke’s toy. It is a size that allows three or four mates to get out fishing on the ocean in a fair range of weather conditions. Not edge of the shelf stuff but certainly Five Fathom Bank or Shark Bay under most conditions. The two up front get swivel seats on storage boxes, the two in second class get quarter seats. What bumps them up from steerage is the location right aft: they get the best of the ride.

In a small boat particularly, ride is very load sensitive. In the 475, the difference between one on board and three is a revelation definitely enough to encourage you to enlarge your circle of friends or to urge the existing ones to take up fishing.

The choice of power, similarly, should take into account your typical loads. With the minimum suggested 50hp it copes with two or three people and a bit of gear. And with a two-stroke instead of the review boat’s four-stroke, it costs a very economical $35,680 on a multi-roller trailer. With a regular four on board, or for traveling long distances, you could do with more horses. But even pushing to the maximum 90 hp takes the price only to a little above $38,000.

You could haul the price down further by negotiating for a paint-free version, though the natty magenta paintwork of the review boat, teamed with polished rubbing strakes, makes quite a fashion statement. The whole boat is well finished and something to decorate any driveway.

One of the clues to the Coraline’s frugal use of power is how easily it planed. It minimum planning speed of nine knots is good without being class leading but how much throttle it needed to do it was exceptional. Once it actually planed we could drop back the throttle setting to almost nothing and keep right on planning. Getting trim dead right helped of course, but this is definitely a low-fuel consumption rig.

Layout is traditional with up-to-date enhancements. A near full-height motor well keeps the quarter seats apart, and side pockets stretch the length of the cockpit, just like they used to do. The driving position is raised giving a commanding and well-protected view. A roomy anchor cable bin is provided aft of the bowsprit and an opening windscreen centre section gives access to it.

The nice details are present: a restraining system for gear stowed under the foredeck, a grab rail for the navigator. And he needed it: this is a fun boat and we tossed it around a lot.

Overall this is a capable and affordable boat. It does not drink a lot and, especially with a two-stroke motor, it costs very little to maintain.