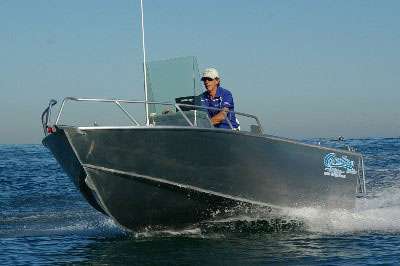 IF THE PRICE IS RIGHT, THEN ALL ELSE IS GREAT

Coraline finishes its boats in two distinct styles. One has the bells and whistles, linings, upholstery and paint, and the other very much does not. It’s all about making boating affordable to a wider range of buyers. Either way – judged by the criterion of does it do the job – you get a good boat.

The review boat is firmly in the second category. The Coraline 460 Series Centre Console has carpet (almost compulsory in an aluminium boat) and an upholstered driver’s seat, but all traces of luxury end there. It is a paint-free zone, the potential lockers have no doors, a built-in fuel tank is extra – as is any kind of sunshade, but it has a tremendously attractive feature: a starting price of $23, 045.

That gets you a 40hp two-stroke Yamaha, which would be adequate without being exciting. The review boat had a 60hp four-stroke, and this gave plenty of zip but at a premium of more than $4000. There are various other ways of making this a more expensive boat: paint for $2350, a kill tank for $1190, or that 80-litre fuel tank for $1320. When you see them laid out and priced like this, it makes you wonder just how desirable they are. With no paint, you can’t scratch it. You would get a lot of change out of $1190 by settling for an esky. And how much value is in the built-in tank?

I see it from almost the opposite point of view: if your boat can get away with portable tanks, what a huge advantage this can be. Easy to refill, they are also easy to drain, clean and dry out. You would have to work this boat hard to need more than a pair of portables.

The boat containing this basic approach is a very workmanlike piece of gear, starting with a hull built like a scaled-down cray boat. Seam welding wherever you look, and a structure that treats every piece of metal as an integral part.

The wide coamings and side pockets brace the sides, and the rear quarter seats – slabs of aluminium with carpet glued on top – act as massive gussets aft. They attach to a full-height splash well.

The bottom has the unusually deep deadrise of 16 degrees, yet despite this and a modest beam of 2m, the 460 has above-average stability. Contributing to this are wide reverse chines and a waterline beam almost the same as the overall. Those chines climb steeply from about half-length to give a very soft entry with plenty of reserve buoyancy and flare above. The look is purposeful and the results felt good. In the early stages of a sea breeze, the ride was soft and completely dry.

Bow rails and grab rails at the quarter seats are standard but at the typical standing spot – or perched on the coaming – alongside the console there is a shortage of handholds. Easily added as an extra, of course, and that is the style of this boat: start with a core fishing boat and add what you need.

The buyer of this boat actually subtracted something: the bow platform. This also removed the swivel fishing seat and reduced the storage space substantially but there is still a fair amount left. The side pockets are roomy and long and, lined with carpet, would handle several rods apiece, adding to the pair of rod sockets in the well. The seat box has a cave opening, and the console has a coaming at deck level to restrain bulky items, and a shelf at mid-height.

The driving position is good both standing and sitting, the surprisingly comfortable swivel seat being set at an ideal height. The dash has the usual Yamaha digital gauges and the shelter of a simple screen. This is simply a wraparound piece of perspex.

The 60hp Yamaha was as big as the agents recommend, though the hull is rated for 75. I could certainly see no case for more power and would probably be happy with a 50hp two-stroke and the $2000 change. We had an abundant acceleration and quickly reached our maximum of 28 knots.

Some people might see the 460 as a starter package, others as a boat for life. It could also appeal to people downsizing who want simplicity and low maintenance.